Follow these Catalytic Converter Theft Prevention Tips to avoid becoming the next victim!

Catalytic converter thefts have continued to soar since the beginning of the pandemic, in virtually all states across the USA. Catalytic converters are valuable to thieves and expensive to replace, but by following these useful tips you can avoid becoming the next victim of theft.

Miller Cat Bonus Tip: For owners with vehicles with lower clearances (passenger cars), parking on hills, grass gravel or uneven surfaces can deter thieves from attempting to jack up your vehicle. If a thief cannot lift your vehicle, they won't be able to take your converter.

Park In A Secure Area

More than anything else, thieves hate exposure. Be aware, and cautious, of where you park your car so criminals can’t steal your catalytic convertor without a risk of being seen. For parking at home, a locked garage or well-lit driveway is your best option.

When you have to park outside, the key to keeping your car safe is being selective about where you park. If you’re parking in the street, try to pick one that is well-lit and has plenty of traffic. Just the prospect of being seen can be enough to deter a would-be thief.

Beef Up Your Home Security

Just because you can’t park in a garage doesn’t mean you have to allow yourself to be targeted by thieves. The technology which allows you to monitor your home and vehicle has improved significantly in recent years and you can easily use this to your advantage to keep your car safe.

Motion-sensitive lights are an inexpensive way to protect your car and make it look like you’re home when you may not be. Catalytic converter thieves prefer to operate under the cover of darkness and with some motion-sensitive lights having a range of up to 70 feet, criminals won’t even have a chance to get close to your vehicle without being lit up.

Miller Cat Comment: Having evidence against thieves is important information that can help the police arrest and prosecute thieves. Your video of faces or license plates can help take thieves off the street.

It may be tempting to avoid getting the police involved in a theft, particularly if you drive an older car that isn’t worth very much. However, if a catalytic converter theft occurs and is left unreported, the frequency of theft can easily increase if it is not dealt with.

Reporting the theft of a catalytic converter not only helps police target hotspots for theft but also helps legislators pass local laws to make it for stolen goods to be sold. Most police reports of theft can even be reported online or over the phone.

Know If Your Car Is A Likely Target

Most people assume that high-end luxury cars would be popular targets for thieves but in our experience of manufacturing catalytic converter anti-theft devices, the most targeted vehicles are regular cars that people drive every day.

One of the cheapest ways to deter catalytic converter thieves lies with the humble spray can. A brightly colored, temperature-resistant spray paint can serve as a deterrent to would-be thieves who avoid marked or painted catalytic converters and move on to their next target.

Why spray paint? Typically scrap merchants won’t buy a catalytic converter if it’s painted or marked in any way, meaning all the paint would need to be removed before it can be sold – a time-consuming and frustrating task for criminals out to make a quick buck.

Miller Cat Comment: Painting may deter recyclers from accepting stolen converters or can alert law enforcement to a potential crime.

In some states, scrapyards are legally unable to purchase used parts if the seller is unable to provide proof of ownership. As a VIN can only be physically checked against the compliance plate on your vehicle or its registration papers, engraving your catalytic convertor turns it from a valuable commodity to a worthless piece of metal as soon as it’s removed from your car.

Miller Cat Comment: Engraving your catalytic converter may help you locate that converter if ever it gets stolen however it may easily be sanded off.

We know that people are reluctant to report potential suspicious behavior but prompt and detailed reporting of any suspicious activity can lead to an increase in police activity and patrols in your area, deterring future thefts. Local law enforcement takes all reports seriously and will assess the situation and provide additional community support.

Suspicious activity can include:

Miller Cat Comment: Preemption can help protect your neighborhood from catalytic converter theft before it happens. Based on nationwide trends, the problem is only growing and it is better to be prepared before the thieves strike.

Display A Warning Sticker On Your Vehicle

A sticker placed on the window of your vehicle warning that your car has been fitted with an anti-theft device can be enough to scare off malicious people determined to steal your catalytic converter. Thieves are generally opportunistic and will take the time to look through the windows of a vehicle to check if any valuables are left inside. 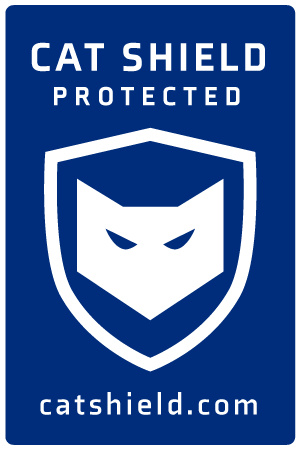 We provide window warning stickers with every Cat Shield device we manufacture. This acts as an initial visual deterrent to warn would-be thieves that your vehicle has been fitted with one of the strongest anti-theft devices available.

Want the ultimate in anti-theft protection? Talk to us at catshield.com

Hey, nice article about 8 catalytic converter theft prevention tips that work. I will definitely follow these for my company to give the best possible services to my customers. Keep on adding this type of valuable content again and again. Hope to read more from you. Thank you. Kindly follow us if you like – https://lewishamsmashrepairs.com.au/

I have a 2004 and a 2012 Toyota Prius. Cat stolen off the 2004 last year.
I am looking to protect both cars with your products. Would like the SS material and the premium attaching hardware and any tool I need to put snap rivets into the frame if needed.
Is there any possibility of a small discount for buying two setups?
Not totally necessary of course. Just asking.
Please let me know the cost for both sets and I will buy them soon.
I have a car lift so installing will be no problem.